Below is a list of the main biographical books on Robert Graves, starting with his own autobiography Goodbye-to-All-That, first written in 1929 and revised in 1957. In 1929 Robert Graves went to live abroad permanently, vowing 'never to make England my home again'. This is his superb account of his life up until that 'bitter leave-taking': from his childhood and desperately unhappy school days at Charterhouse, to his time serving as a young officer in the First World War that was to haunt him throughout his life. It also contains memorable encounters with fellow writers and poets, including Siegfried Sassoon and Thomas Hardy, and covers his increasingly unhappy marriage to Nancy Nicholson. Goodbye to All That, with its vivid, harrowing descriptions of the Western Front, is a classic war document, and also has immense value as one of the most candid self-portraits of an artist ever written. I partly wrote, party dictated this book 28 yeas ago during a complicated domebntic crisis… Reading it over again gor the first time since 1929, I wonder how my publishers escaped libel action…A good many changes have been made in the text, omission of many dull and foolish patches, restprario of a few suppressed anecdote, replacememt of the T.E.Lawrence chapter buy a longer one written five years later; correction of factual misstatements… 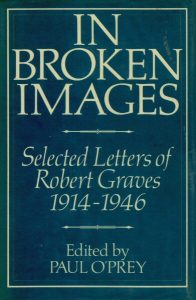 Included in Paul O’Prey’s selection is a fascinating, never-before published correspondence with his close friend and fellow poet of the First World War, Siegfried Sassoon, which was carried on from 1916 until their quarrel in 1933; and also represented are exchanges with T. S. Eliot, Edmund Blunden, Gertrude Stein, Basil Liddell Hart, and the Welsh poet of the Second World War, Alun Lewis. 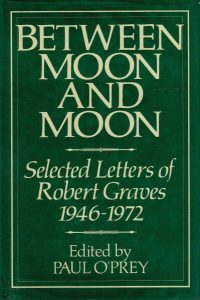 This is the second volume of Graves’ letters, the first of which, In Broken Images (Hutchinson 1982) received much critical acclaim. This volume covers the years of Graves’ greatest fame and controversy, when he wrote some of his best books and the well-known love poems to his ‘Muses Graves wrote his letters exactly as he talked: with intimacy, wit and honesty and in this is perhaps one of the last of the great letter writers. In this volume his correspondents include: James Reeves, the poet and critic, TS. Eliot, Idries Shah the controversial Sufi expert, Selwyn Jepson the thriller writer, John Wain the poet and novelist, Alan Sillitoe poet and novelist, Martin Seymour-Smith. 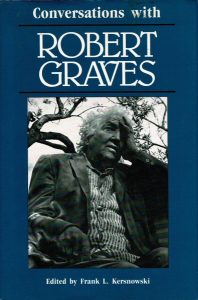 This collection of interviews gives the full flavour of encounters with Robert Graves, a twentieth-century magus and mythmaker whose novels, poetry, and cultural studies aroused both controversy and admiration. Though he lived most of his life in the remote village of Deya on the island of Mallorca, Robert Graves (1895-1985) was conversant with the most important issues of this century and was acquainted with many of the most powerful of people. Jorge his Borges called him “a soul above.”
Throughout his long and productive life, whether he was talking with Virginia Woolf, Peter Quenell, Jorge Luis Borges, Alan Sillitoe, Edwin Newman, or Gina Lollobrigida, the voice of Graves remained clear and distinct— attracting and repelling a variety of interviewers with its surety His books— Goodbye to All That, The White Goddess, I, Claudius; and King Jesus—preserve his literary art. The conversations in this collection keep alive his presence and passion. 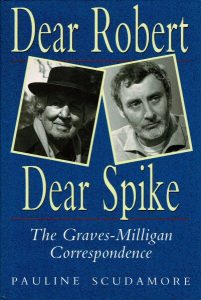 ‘Dear Spike: To think that I nearly turned down that Muses TV show on the ground that I needed neither fame, nor money, nor voice practice. Something intervened: a still small voice.., and as you know we went... . Please write to me and I’ll flog your autograph for an orange tree... or something else useful.’
‘Dear Robert: After consulting several volumes on microscopic writing we finally deciphered your letter..
So in December 1964 sprung the beginnings of the correspondence between Robert Graves and Spike Milligan, which was to bring great pleasure to both, and the start of an immediate and enduring friendship that lasted until Graves died in 1985 at the age of ninety.
Here are the complete letters, written from one poet-friend to another, the spontaneous jottings and confidences of two men instinctively drawn to one another, though seemingly as different as two people could be: the one erudite, a classical scholar and writer... The other apparently a half crazy ex-Goon 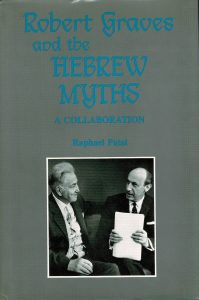 Robert Graves and the Hebrew Myths - A Collaboration (1991)

This book tells the story of the thirty-year friendship between Robert Graves and Raphael Patai, and in particular, the story of the literary collaboration that culminated in their joint authorship of the Hebrew Myths: The Book of Genesis. The friendship between Graves and Patai began in 1947 when Graves, having read Patai’s book Man and Temple, wrote him a “fan letter” full of remarkable scholarly comments and reflections. It was the beginning of an exchange of letters between the two authors that led to their participation in each other’s books and studies, joint public appearances in lectures and interviews, mutual visits, and a lasting friendship This biography was first published in 1982. Martin Seymour-Smith had known Robert Graves since early boyhood, & had lived in his house for more than three years. He wrote it with Grave's help, at his home in Deya, while Graves' (sometime) mistress & muse, the notorious Laura Riding, was still alive. It has served as the basis for subsequent biographies. This is an updated version of Martin Seymour Smith’s original text. But 1995 both Robert Graves and Laura Riding  were dead and libel from Riding was no longer a problem... Since then, some of the material Seymour-Smith deliberately suppressed has been aired, & is no longer as sensitive as it was. In this expanded & largely rewritten edition, he sets the record straight. ROBERT GRAVES: LIFE ON THE EDGE

First published to mark the centenary of his birth, Miranda Seymour's acclaimed biography was written with the full co-operation of the Graves family. Her interviews and correspondence with many people who have not previously discussed Graves in public contribute to a rich and complex portrait of a troubled man and a great creative artist. "I have never been able to understand the contention that a poet's life is irrelevant to his work," Graves said. Miranda Seymour puts Graves's statement to the test in this superb biography and, thrillingly, demonstrates its validity. A biography of the early years of Robert Graves, providing a detailed account of the writer's parents, upbringing, first marriage, friendships, and service in France during the war. This is the second of three volumes. One quickly gets a fix on Graves’ school years, apprentice writing, trench warfare, marriage, and four children. Then, in 1926, enter Laura Riding, an American poet who had already, by age 25, divorced one husband, was rumored to have had an abortion in the aftermath of an affair with poet Allen Tate, and endeared herself to the poetry frog pond by what would become a lifelong strategy: making megalomaniacal claims for the importance of poetry and, as a corollary, for herself as the leading poet of the age. In Graves, Riding found someone whose need to abase himself before a woman of stronger character perfectly matched her need to dominate. The result was an emotional vortex that would suck dozens of other luckless victims into it over the next 15 years. The final chapter in the life of Robert Graves. A must after encountering the previous volumes or simply to be enjoyed as a novel in it's own right. In 1944, at the age of five, William Graves was taken from England to the delightful mountain village of Deya in Majorca, where his father - the poet Robert Graves - had returned with his new family to the place he had lived with Laura Riding before the war. Young William grew up in the shadow of this great writer in the Englishness of the Graves household, while experiencing the ways of life of the Majorcans, which had hardly changed for hundreds of years. Wonderfully observant, and full of feeling for the locality, this book is also a fascinating portrait of Robert Graves himself, his 'Muses', and his entourage, and a revealing study of how the son of a famous father finds his own identity. The writer and poet Robert Graves suppressed virtually all of the poems he had published during and just after the First World War. None of the previous biographies written on Graves, however excellent, attempt to deal with this paradox in any depth. Robert Graves the war poet and the suppressed poems themselves have been largely neglected - until now. Jean Moorcroft Wilson, relates Graves's fascinating life during this period, his experiences in the war, his being left for dead at the Battle of the Somme, his leap from a third-storey window after his lover Laura Riding's even more dramatic jump from the fourth storey, his move to Spain and his final 'goodbye' to 'all that'. In this deeply-researched new book, containing startling material never before brought to light, Dr Moorcroft Wilson traces not only Graves's compelling life, but also the development of his poetry during the First World War, his thinking about the conflict and his shifting attitude towards it.